If you stroll through the New Rochelle Walk of Fame in Ruby Dee Park, you’ll find legendary names like Thomas Paine, Norman Rockwell, Carl and Rob Reiner, Richard Roundtree, Carrie Chapman Call, Monty Hall, and Jay Leno. But perhaps the most famous is the only one that’s not human: Mighty Mouse.

During his heyday in the 1940s and ‘50s, Mighty Mouse had more than forty million people a week in seventeen thousand theaters across the country singing “Here I come to save the day!” The animated rodent, along with Heckle and Jeckle, Deputy Dawg, and others were created right here in New Rochelle by Paul Terry, and animated at Terrytoons Studios.

Terry moved from California to New York in 1911. The newspaper cartoonist and photographer made his first animated film in 1915, Little Herman, after being encouraged by Winsor McCay, who is believed to have created the first American cartoon, Gertie, the Dinosaur.

“Young man, this form of artistic expression is going to be important one day, and I advise you to get into it,” McCay told him. 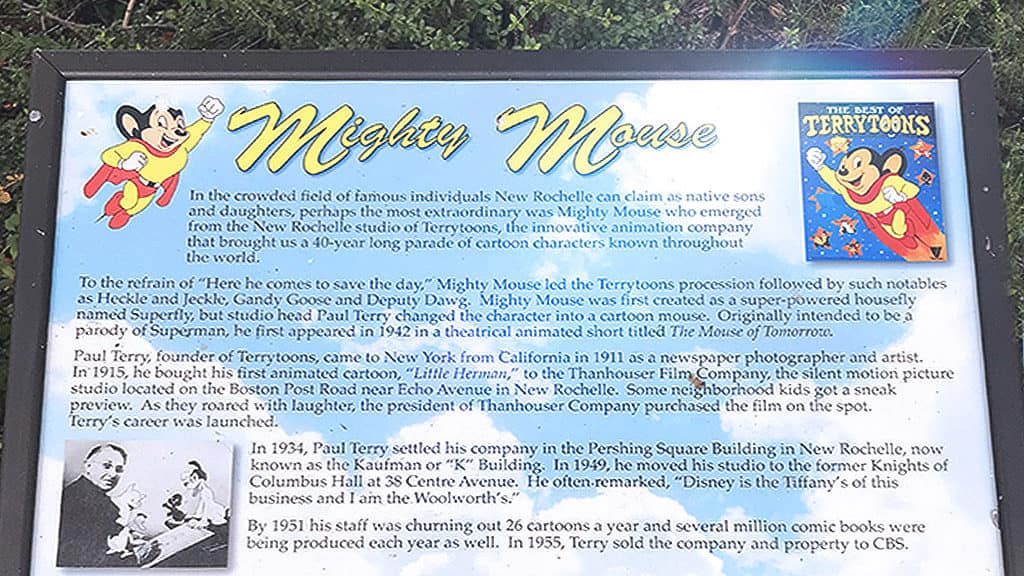 Terry listened, and by 1929 opened Terrytoons Studios in Long Island City. Two years later he moved to 271 North Avenue in New Rochelle and ingrained himself in the community, even becoming a volunteer firefighter. Eventually, Terry shifted his productions to a three-story studio at 38 Centre Avenue.

Terrytoons typically employed more than a hundred creative minds to crank out stories, gags, and animation cels, resulting in a new cartoon every two weeks. In contrast, it took Disney an average of three or four months to release an animated feature.

“Disney is the Tiffany’s of this business and I am the Woolworth’s,” Terry liked to say. 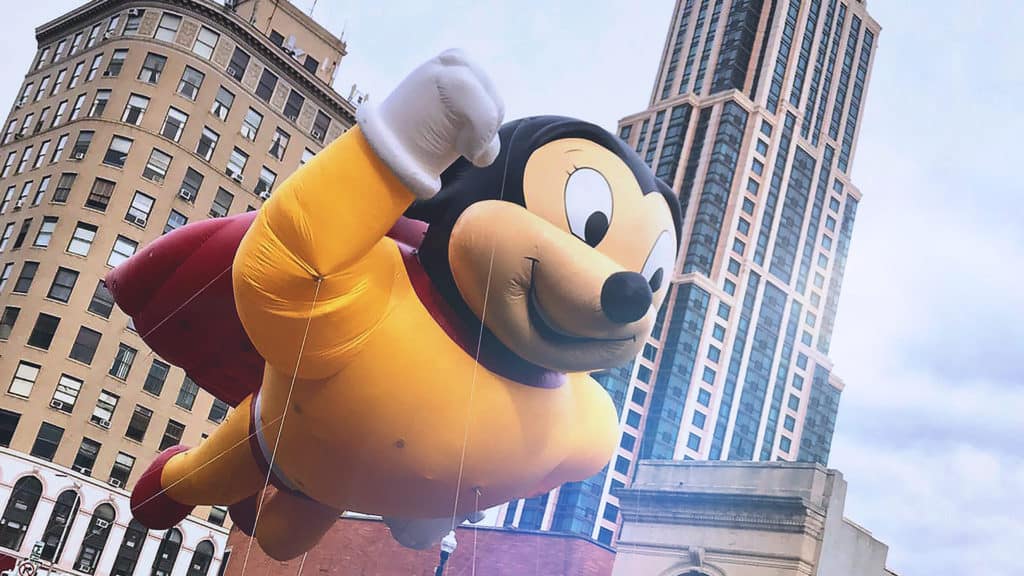 The Mighty Mouse balloon flies high past the K Building at the New Rochelle Thanksgiving Parade.

Of course, it was a huge group effort to produce so many cartoons. That group even included the kids for who the films were made for. Long before the days of social media, Terry sought feedback directly from theatergoers.

“They’d keep track of the audience, who laughed, who was quiet, then we’d reanimate where the kids laughed,” recalled Doug Crane, who spent seven years inking, coloring, and animating at Terrytoons. All the fine-tuning led to a rewarding finished product.

“It was quite a thrill to see your name up there in the credits,” he added. “There was your name in shining lights, and you felt pretty darn good.”

Crane’s creations weren’t his only joy at the studio. He also met his wife there—fifteen minutes after his first day on the job in 1956. He later helped animate everything from The Smurfs and He-Man to Beavis and Butt-Head. Now 83, Crane still lives in New Rochelle.

Among the other notable artists who passed through the Terrytoons studio were Joseph Barbera and Jules Feiffer.

Terry took comfort in knowing the cartoons his team labored over would live on long after him. The joy he created for generations of kids also created his own slice of immortality. That said, in a 1951 interview, he feared what might await him in the afterlife: “You know, before sound and Terrytoons came in twenty-odd years ago, we made 460 Aesop Fable cartoons. He wrote only 220 stories—I’m afraid to die, he’ll be waiting for me.” 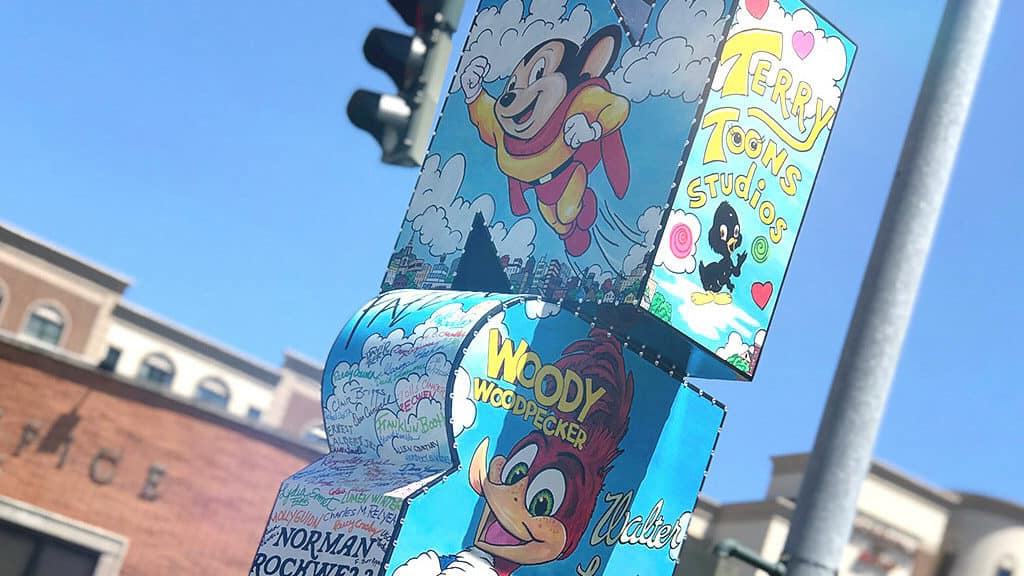 In 2016 Mighty Mouse resurfaced in New Rochelle as a 38-foot balloon in the local Thanksgiving Day parade. And just a few months ago he made a more permanent appearance downtown on a new seven-foot-tall sculpture by world-renowned 3D pop artist, Charles Fazzino.

“My building was actually a warehouse storage facility for Terrytoons so we like to say that Mighty Mouse was born here,” Fazzino said. “It’s a bit of a stretch but it’s so important to the artistic history of this area and just makes me even more proud to be an artist from New Rochelle. There has always been a creative spirit here and I’m very proud to be able to carry that forward into the future…and pass it along to my daughter and her generation.” 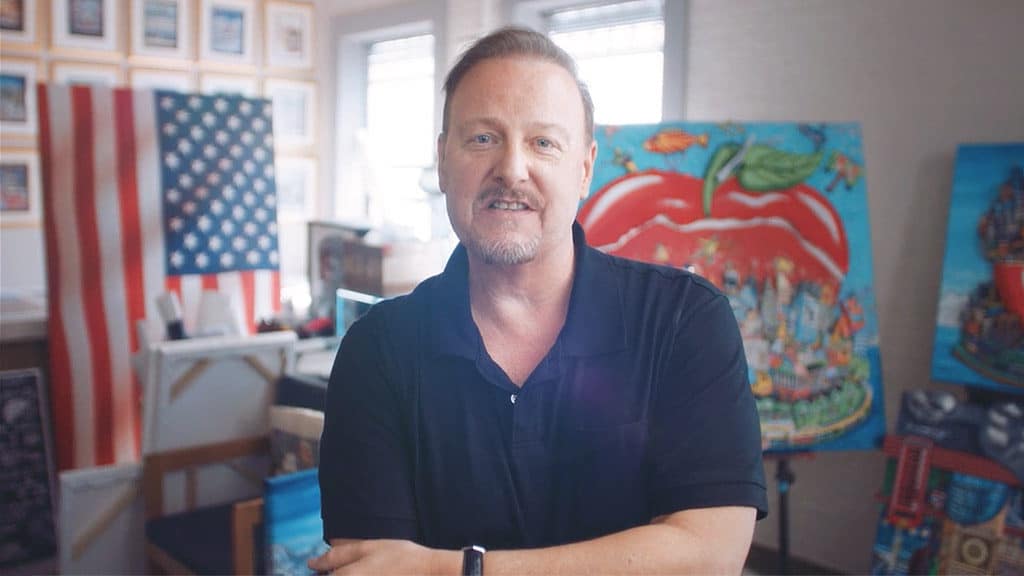 The artwork is part of a project called “Stacked!” which was organized by New Rochelle’s Municipal Arts Commission and Department of Development. It can be seen at the corner of North Avenue and Huguenot Street.

Mighty Mouse and other Terrytoons cartoons are a little tougher to find on TV, but online these New Rochelle characters are still getting laughs all over the world.